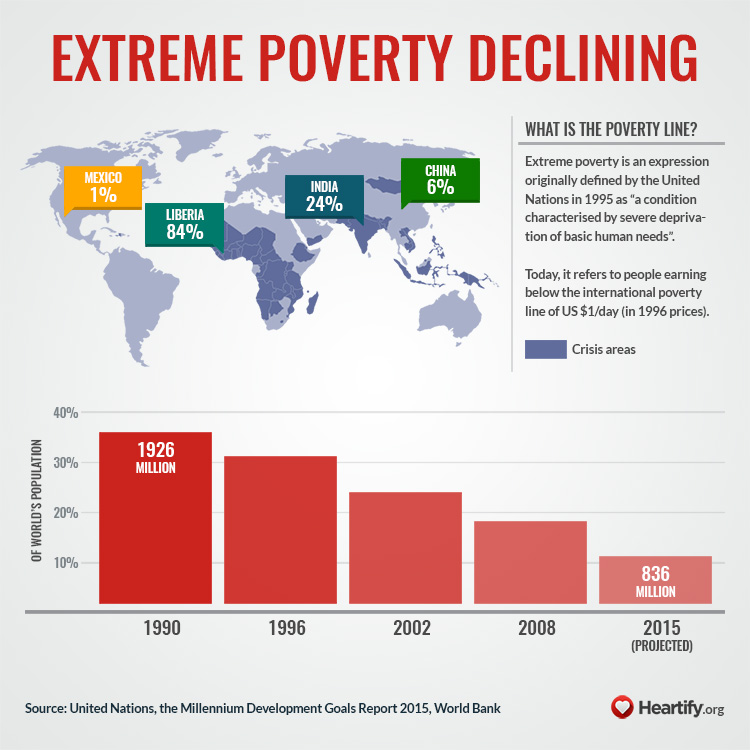 Reading the news, it sometimes feels like the world is falling apart: horrible accidents and injustices happen on a daily basis. However, in fact, we're actually living through what is, by objective metrics, the best time in human history. Here Heartify highlights one of the main accomplishments during the last 25 years: the reduction of extreme poverty.

What is Extreme Poverty?

Extreme poverty is an expression originally defined by the United Nations in 1995 as “a condition characterised by severe deprivation of basic human needs, including food, safe drinking water, sanitation facilities, health, shelter, education and information”. At that time extreme poverty was not only referring to income, but also on access to services.[1]

Today, extreme poverty refers to earning below the international poverty line of US$1.25/day in 2005 prices, set by the World Bank. This measure is the equivalent to earning US$1 a day in 1996 prices, hence the widely used expression, living on "less than a dollar a day."[2]

Where can we find Extreme Poverty?

The vast majority, 96%, of people in extreme poverty live in just three regions: South Asia, sub-Saharan Africa, and East Asia and the Pacific; more than 80% live in just 10 countries; nearly half live in India and China alone.[3]

The top five poorest countries in the world, in terms of actual numbers, are India (with 33% of the world's poor), China (13%), Nigeria (7%), Bangladesh (6%) and the Democratic Republic of Congo (5%). If adding another five countries; Indonesia, Pakistan, Tanzania, Ethiopia and Kenya, you account for almost 80% of the extreme poor.[4][5]

The share of people in poverty is highest in sub-Saharan Countries such as the Democratic Republic of Congo (87.7%) and Madagascar (87.6). In comparison, in India 23% of the population live in extreme poverty and in China 6%.[5]

How have Extreme Poverty Developed?

Between 1990 and 2015, about 1.1 billion people have been lifted out of extreme poverty. That means that in just the past 25 years, a full seventh of humanity have been saved from the harshest of conditions. That is, in 1990, about 36% of the world's population was living below the poverty line, by 2010 that number had reduced to 18%. The world actually attained the first Millennium Development Goal target, to cut the 1990 poverty rate in half by 2015, five years ahead of schedule, in 2010.[6][7]

Today, there are about 836 million people living in extreme poverty, which is equal to about 11% of the world's population of roughly 7.4 billion people. The World Bank have set up an ambitious, but achievable, task to reduce extreme poverty to 9% by 2020 and to 3% by 2030.[3]

"Poverty’s scourge is fiercest below $1.25: people below that level live lives that are poor, nasty, brutish and short. They lack not just education, health care, proper clothing and shelter—which most people in most of the world take for granted—but even enough food for physical and mental health. Raising people above that level of wretchedness is not a sufficient ambition for a prosperous planet, but it is a necessary one. The world’s achievement in the field of poverty reduction is, by almost any measure, impressive."

What Does the Future Hold?

Tackling poverty requires understanding about the situations we currently live in. According to the World Bank, concentrated and targeted efforts in countries where large numbers of the world's poor live is needed. Not only will economic growth remain vital for reducing poverty, but it also needs to be complemented with policies that allocate more resources to the extreme poor.[4][8]

A paper by the World Bank stated that it is imperative not to just lift people out of extreme poverty; it is also important to make sure that, in the long run, they do not get stuck just above the extreme poverty line due to a lack of opportunities that might impede progress toward better livelihood.[4][8] 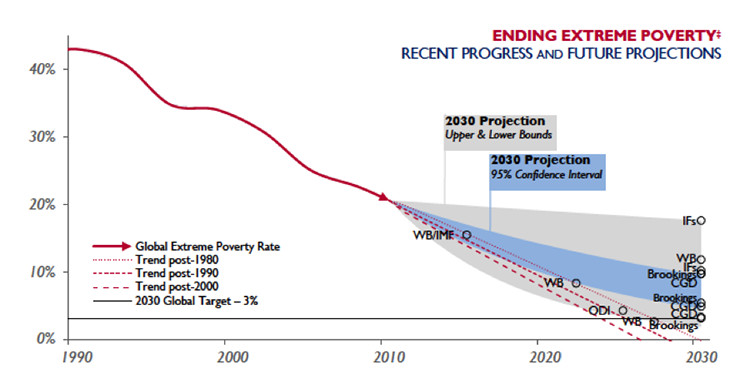 Hans Rosling, a delightful Swedish Professor of International Health, tours the world to expose negativity bias as part of his Ignorance Project. Below you will find a extremely entertaining video from a recent TED talk. In the video he asked his audience about the development of extreme poverty in the last 20 years.[5]

Rosling presents the audience with three alternatives; has the percent of people living in extreme poverty A. Almost doubled B. Remained about the same or C. Almost halved. The audience answers were compared the answers to the US public. A staggering two-thirds of US adults thought poverty had doubled, 29% believed it had remained the same, while only 5% knew it had gotten better. The audience was not much better. 37% though poverty had doubled, 26% though it remained the same while only about one-third thought it was halved.[5] 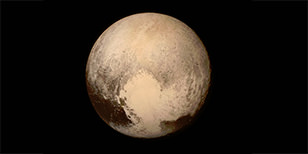