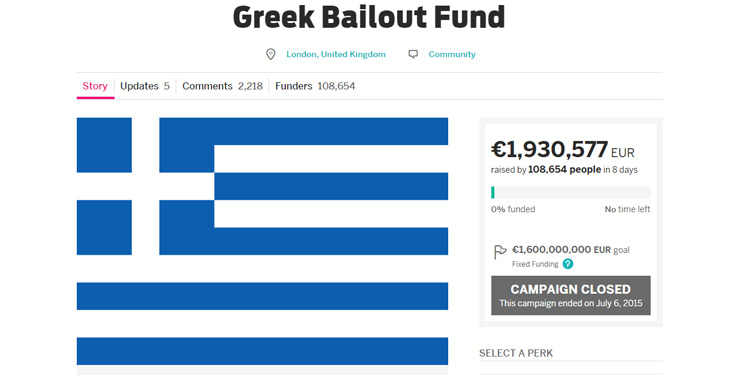 No one has been able to escape the media frenzy surrounding the turmoil in Greece and while the country’s future within the Eurozone is yet to be determined, a compassionate British shoe shop worker have decided to extend a much needed hand by launching an online crowdfunding campaign to help solve the Greek debt crisis.

Thom Feeney, the London man responsible for the innovative crowdfunding campaign hopes to raise the money for Greece to meet its debt repayment to the International Monetary Fund. Speaking outside his local shop, Mr. Feeney said that he had been “watching politicians going round in circles and dithering somewhat with making a decision on Greece” and thought that “it just needs someone to step in and sort it out”. Since setting up the campaign, the response from people has been overwhelmingly positive. In the first few days, the campaign generated so much traffic that it overwhelmed the IndieGoGo crowdfunding servers, crashing the website.[1]

People from across the world have joined forces to raise an astonishing €1.93m for the ‘Greek Bailout Fund’, hoping to ease their debt burden. But because the crowdfunding campaign failed to reach its, to put mildly, ambitious €1.6bn target, all money was returned to the more than 100,000 donors who took part.

However, fear not, the crowdfund organiser does not give up that easy, he has already launched a new campaign, Greek Crowdfund, under the motto “by the people, for the people”. All funds received this time around will go directly to Greece regardless of how much, or how little, is raised.

”This is a humanitarian crisis, not just an economic crisis and it’s about bloody time someone did something. The people of Greece still face uncertainty. Greek unemployment stands at 25%, among 16-24 year olds it is an almost unimaginable 50%, hospitals are running short of medicines and basic supplies, old people’s homes are running short of food and fuel”.

For the second time around Mr. Feeney informed first time donors via email that he is now working with Greek Foundation, Desmos. Those who donate can enjoy creative gifts in return, ranging from an Alexis Tsipras, the Greek Prime Minister, postcard to a holiday in Athens worth €5,000. All products are guaranteed 100% Greek.[2]